Are you are a French Toast or a pancake breakfast person? I go through phases. I love a big good ol’ brunch on Sunday and usually end up whipping a batch of one of my go-to pancakes recipes. But sometimes I seriously crave thick, soft, golden brown, slightly sweet, eggy (which is ironic since this recipe is egg-free, ha!) vanilla and cinnamon infused French Toast. This Vegan French Toast with Berry Compote is ALL of the above guys and more. It’s my “always-handy” Vegan French toast which seriously makes the perfect addition to any Sunday brunch! 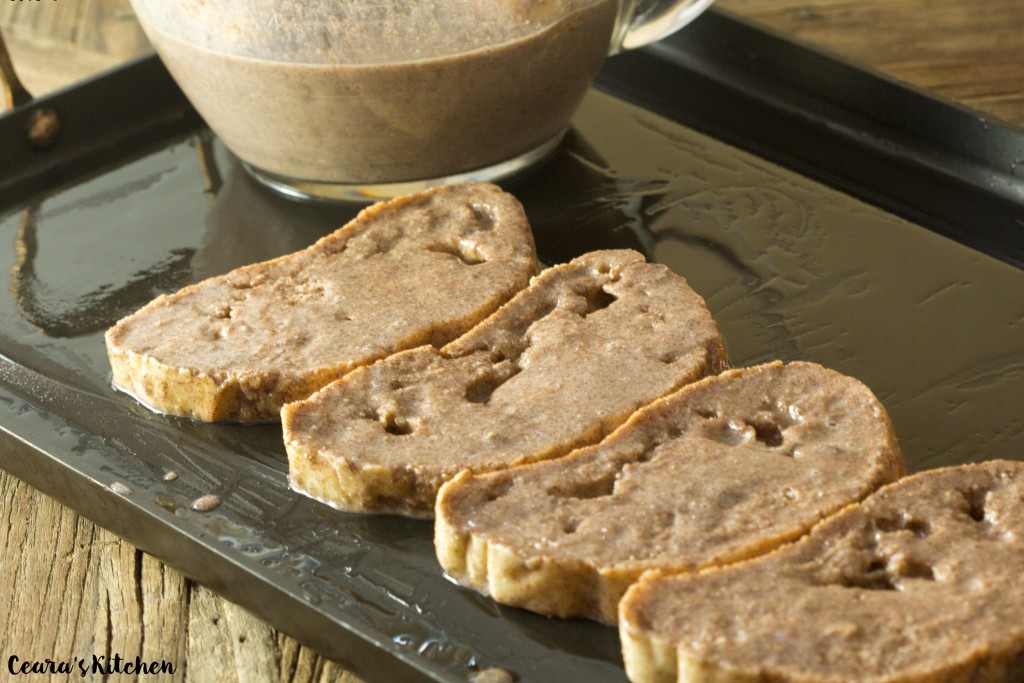 Okay so Vegan French Toast?!? You are probably wondering “what’s the deal Ceara?!” since eggs are a pretty crucial (ahem main ahem) ingredient in French toast. Turns out, just like when you use chia and flax eggs in baking, you can combine ground chia and flax with sweetened vanilla almond milk to make the best Vegan French Toast ever!

Leaving the milk mixture to sit in the fridge for thirty minutes is essential to this recipe. The result is a goopy, slightly thickened and milky-egg-like mixture that is perfect for thick bread soaking and French Toast making! 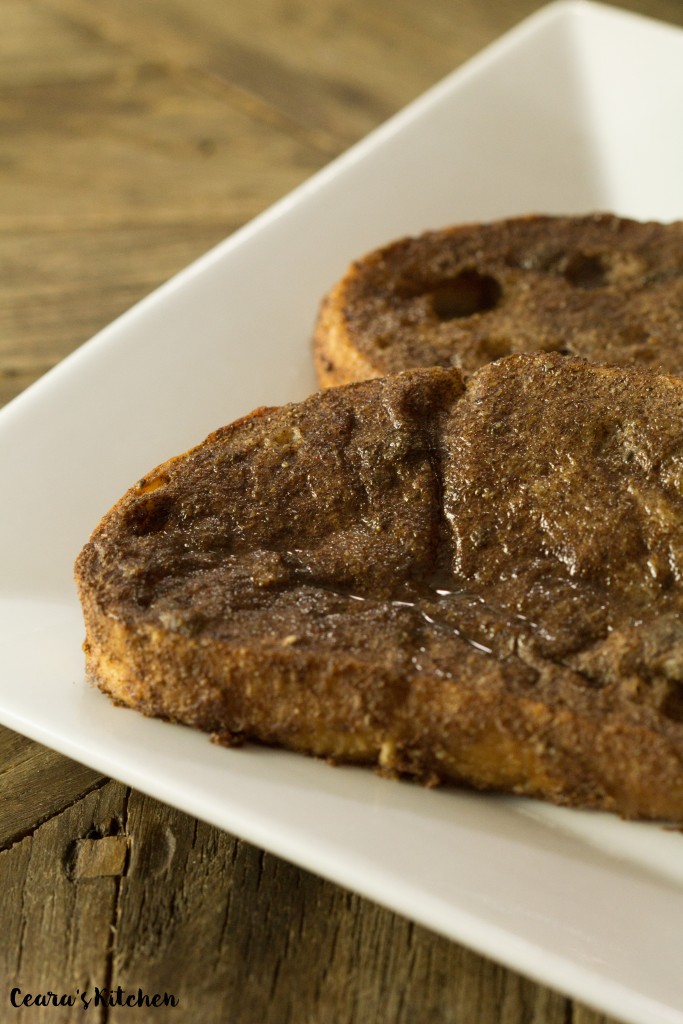 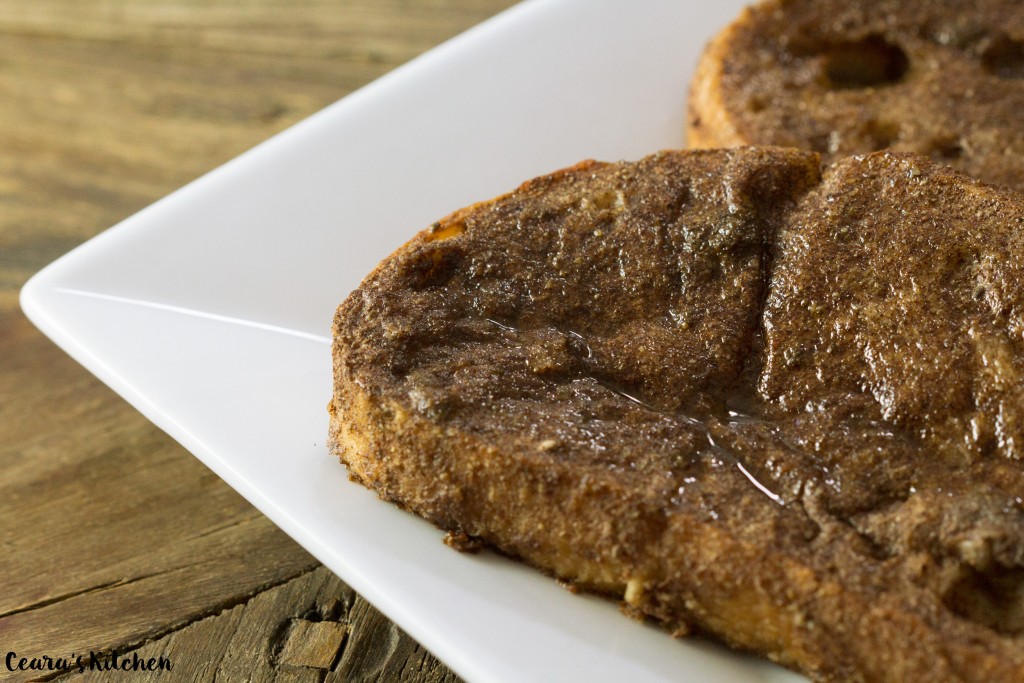 The Refined Sugar Free Berry Compote is technically optional since you can make the Vegan French Toast without it (and just add tons of maple syrup instead, ha!) but I would definitively recommend it. The naturally sweet berry compote soaks right into the cinnamon and vanilla infused French Toast….

And you can still top everything off my lots of maple syrup. YUM! 😀

If you do make this Vegan French Toast with Berry Compote, share your feedback with me by writing your thoughts in the comments below, tagging me (#cearaskitchen) in your beautiful shots on Instagram or sharing your photo on my Ceara’s Kitchen Facebook page. #EatHappyLiveHappy 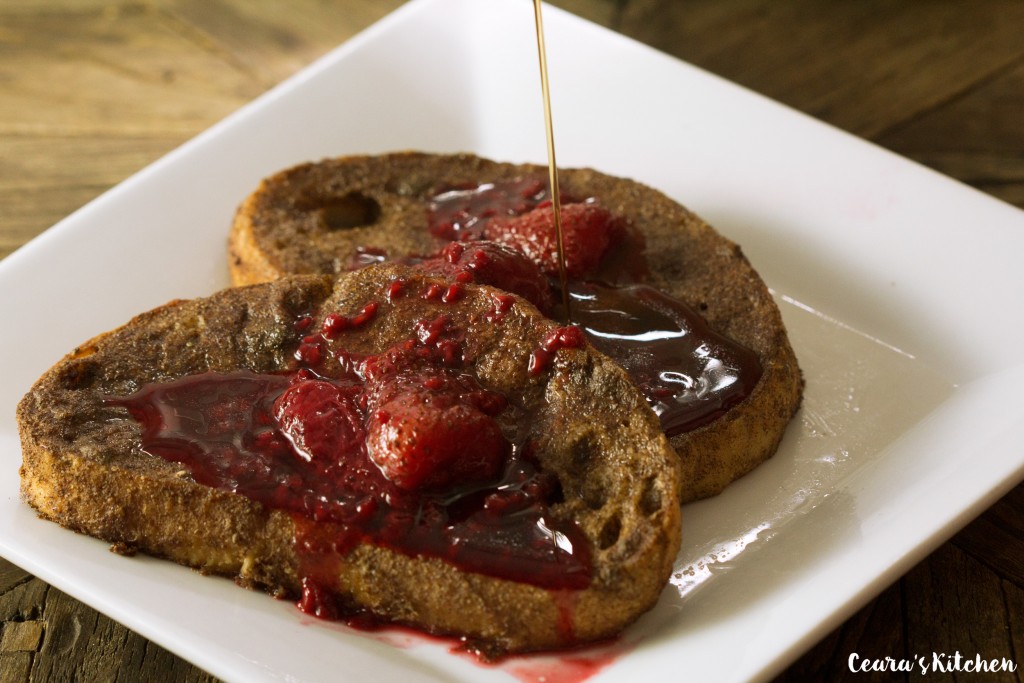 4.0 from 1 reviews
Vegan French Toast with Berry Compote
Print
Prep time
35 mins
Cook time
40 mins
Total time
1 hour 15 mins
Vegan French Toast with Berry Compote is so incredibly soft, eggy and perfectly infused with vanilla and cinnamon. This recipe makes enough to serve a large family. Divide the recipe in half if you are serving less people.
Author: Ceara
Recipe type: Breakfast
Cuisine: American
Serves: 13 slices
Ingredients
Berry Compote
Topping
Directions
Notes
1) This recipe works best with vanilla almond milk or regular almond milk. I've tried it also with soy milk but the results are not as "eggy" and creamy. If you are using plain almond milk, adjust with extra sweetener and vanilla to taste.
2) Reduce the vanilla extract by ½ tsp if you are sensitive to vanilla extract in recipes.
3) I like to use organic white bread in this recipe but you can experiment with other breads as well (whole wheat, etc.). The amount of slices you use will differ based on the brand of bread you use, how thick it is slices, etc...
4) I like using one or two day old bread in this recipe.
5) Line pan with parchment paper and do not top french toast with coconut oil for an oil-free version of this recipe.
6) Frozen or fresh berries work great in the berry compote.
3.2.2925 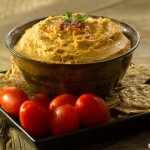 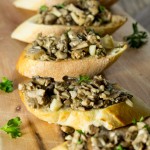 Can I prepare the Chia and flax seed with milk and vanilla the night before !?? I’m always running in the morning !

I go through phases between pancakes, waffles, and french toast! Now you have me craving french toast! Love the berry compote on top 🙂

These are seriously making me drool right now Ceara! I absolutely love french toast and my hubby really LOVES IT! I make it probably once a month, so not very often since we usually do pancakes. I’ve tried making it different ways but never posted anything. I am SO amazed, I have never seen French toast baked before…seriously, that is an incredible idea. I’ve always just fried it! Wow! I love that you did lots of cinnamon and vanilla too because those are my 2 favorite flavors ever and exactly what I put in mine as well. These are so pretty!

<3 Thank you so much girl xo

This looks great Ceara. I love french toast and I’ve made it with flax and chia before also and always prefer to bake it too. So this recipe is right up my alley. Love it.

Made these yesterday and they are AWESOME! Definitely the best vegan french toast recipe I’ve tried. My only mistake was not to crush the chia seeds, so next time I’ll make sure to do that. The flavors were cinnamony and vannilay and just generally yum. I feel like this is a very customizable recipe too – it’d be easy to add in other spices or flavourings like cacao or something!xx

Thank you for the lovely feedback, Gigi! So happy you enjyoed the french toast and that it was a big ht! Cacao sounds like a delicious addition 🙂

After soaking, could you not just fry it as regular french toast? I don’t like french toast to be soggy, and frying it seems the best way to prevent that….

Hmmmm… you could give it a try! I have never tried it though. I think that baking would be the best option because the bread soaks up the liquid and it crisps a bit on top while baking. I’ve made this french toast in the oven many times and it is NEVER soggy and the perfect texture! Let me know if you end up trying it!

I’m usually a pancake person, but I think that’s just because I’m not very familiar with french toast. I’ve only made it once, and frankly it didn’t turn out half as delicious as this looks! I think your grandma is a very smart lady, cinnamon and sweetness, the perfect breakfasty flavors <3

<3 Thank you Natalie!! It's all about the cinnamon and sweetnees, xo!