Vegan Creamy Cucumber Salad is made with fresh dill and a homemade Creamy Ranch Dressing. The perfect side for a Summer BBQ or to bring to a cookout. 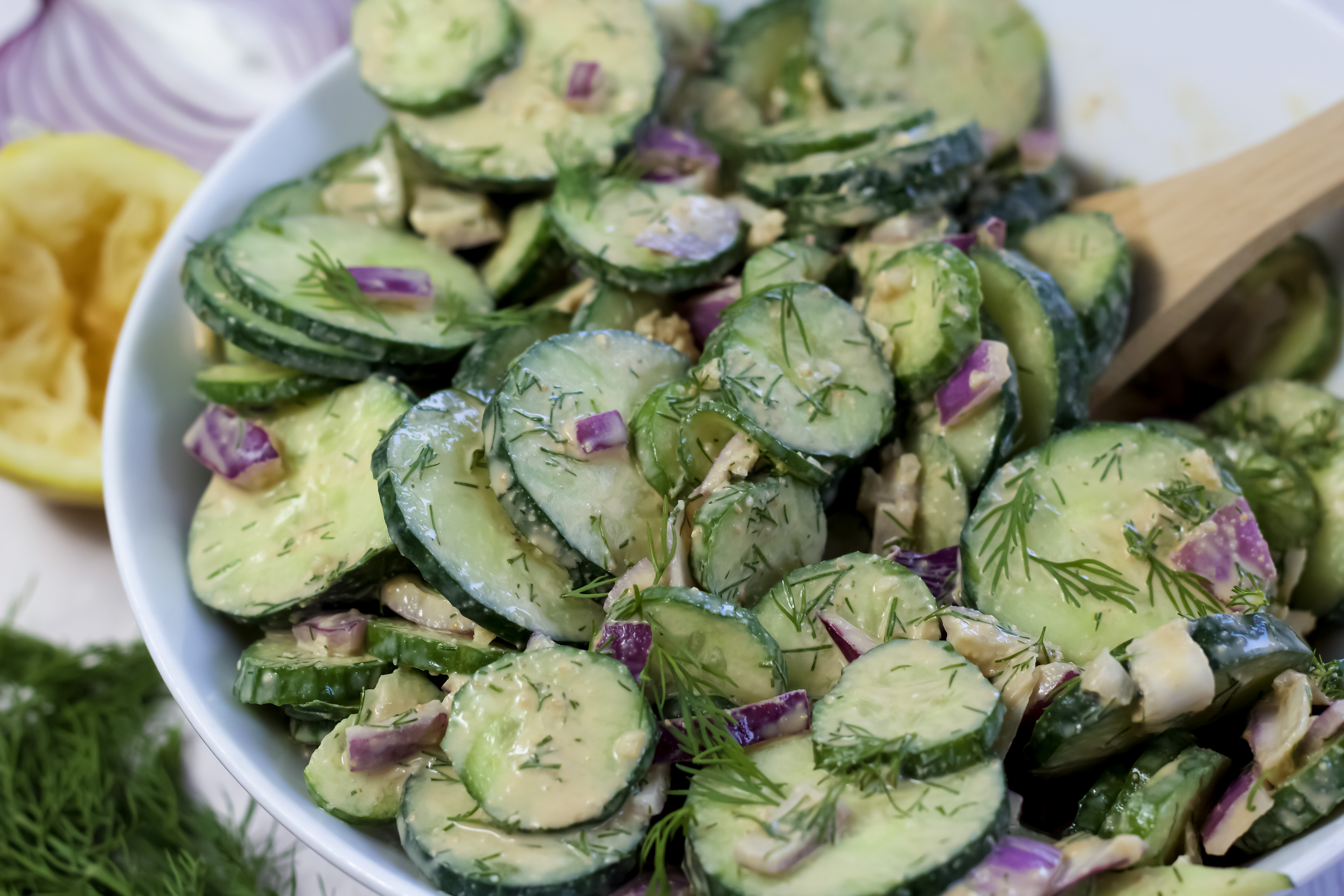 I tried my very first bootcamp last night and it totally kicked my butt! Have you ever attended a bootcamp? I made it to twenty-six without venturing into bootcamp territory but my brother finally convinced me to join him for an outdoor class. I’ve come to understand that because I work at an office during the week, I need to constantly find new ways to be active, so I really had no excuse not to go. I have to say, I was kind of nervous going into the class as I can be pretty uncoordinated and had nooo idea how physically challenging the bootcamp would be. And some parts I was pretty uncoordinated (who can jump lunge, switch legs and shake a heavy rope at the same time?! haha). But, all in all it was a great class and I signed up for ten more! 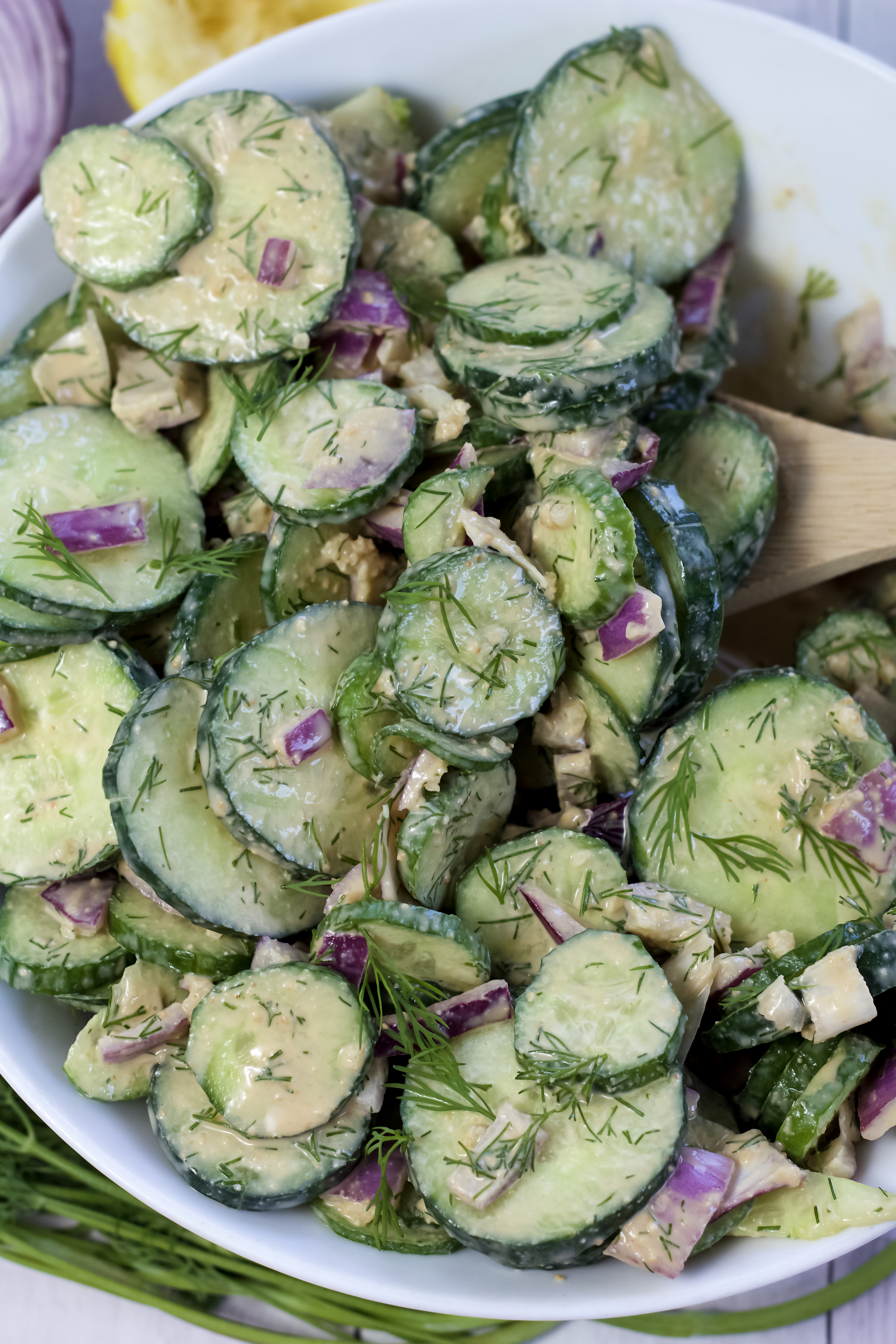 One of my favorite parts of summer are ALL the fresh, homemade salads. And cucumber has to be one of my most loved summer salad ingredients. 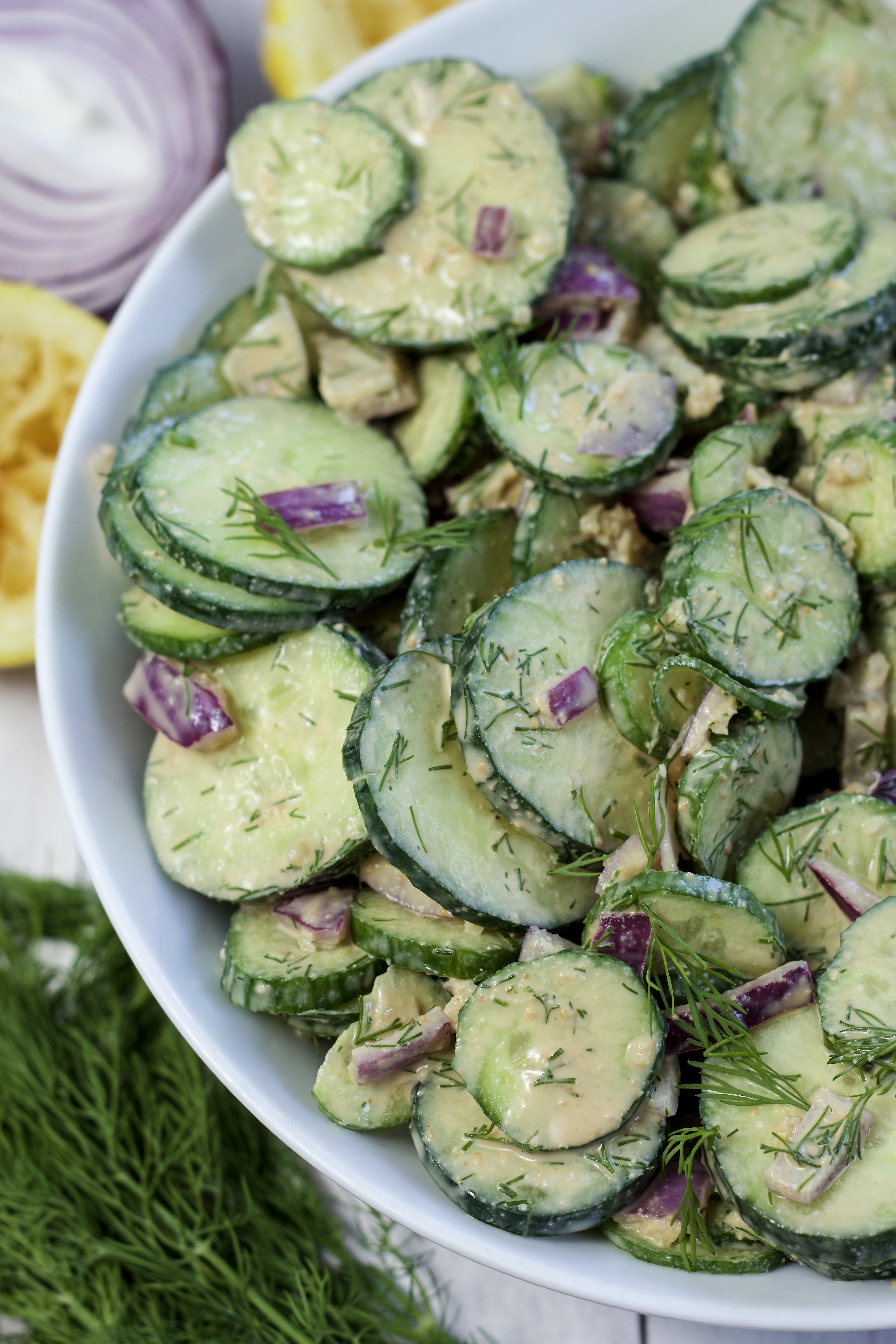 I mean I could seriously eat this Creamy Ranch and Dill Dressing with a spoooooon! 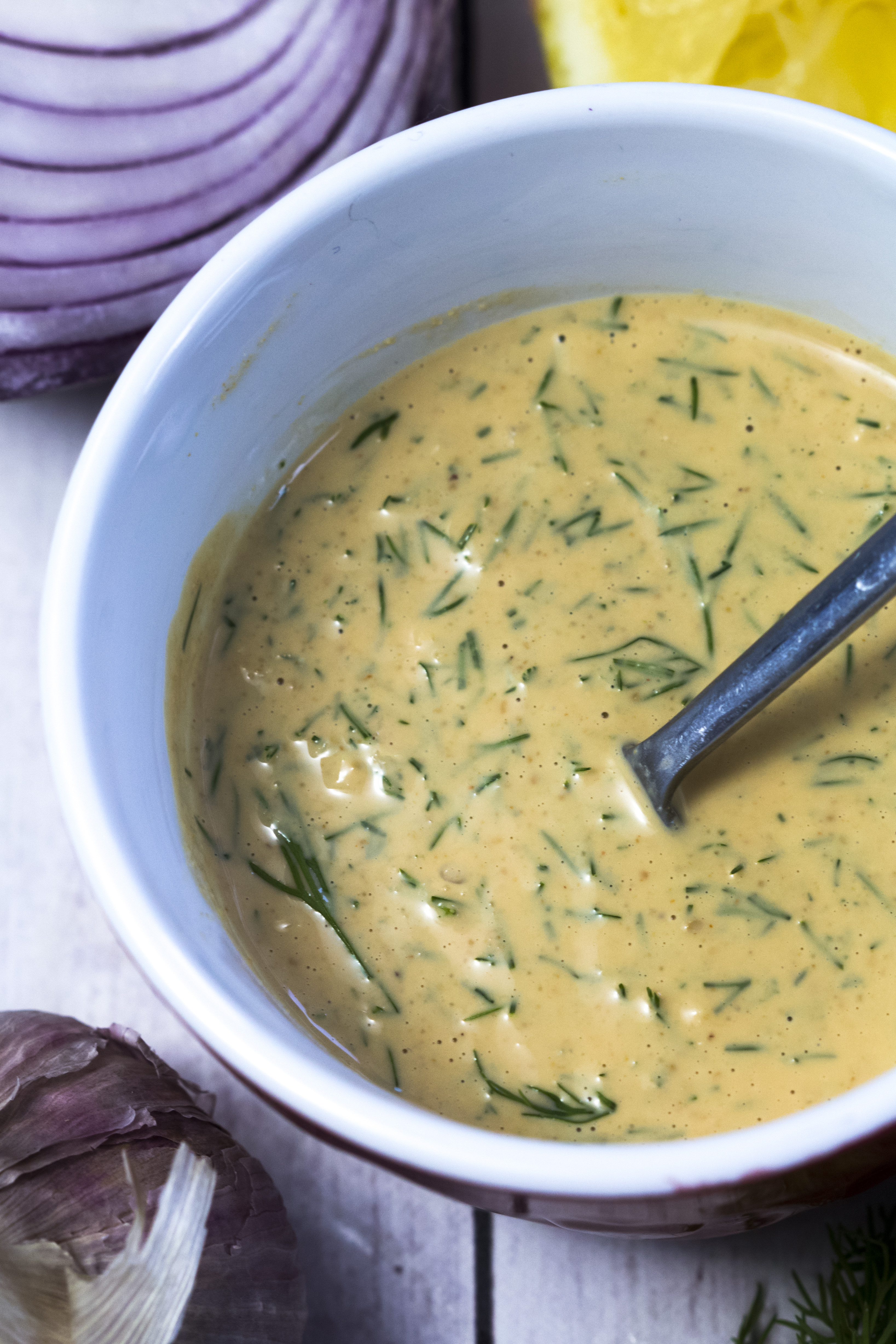 [easy-tweet tweet=”The reason I love summer salads so much is that they are soo darn easayyy.” user=”cearaskitchen” template=”light”]

There are THREE steps in total for this Vegan Creamy Cucumber Salad:

2. Whisk up the dressing until creamy smooooth. 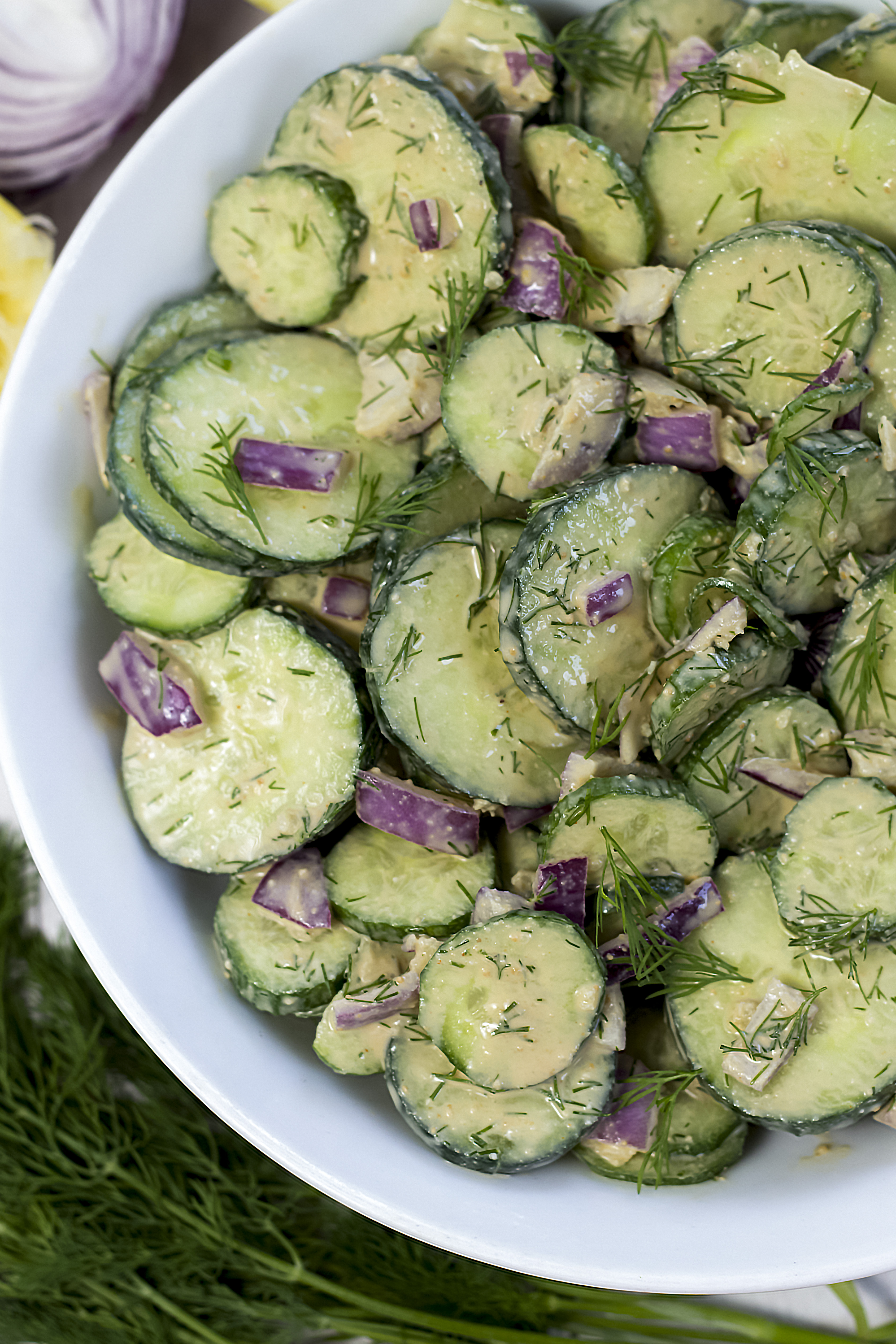 If you make this recipe at home, snap a photo and tag me #CearasKitchen on Instagram or leave your feedback in the comments below. 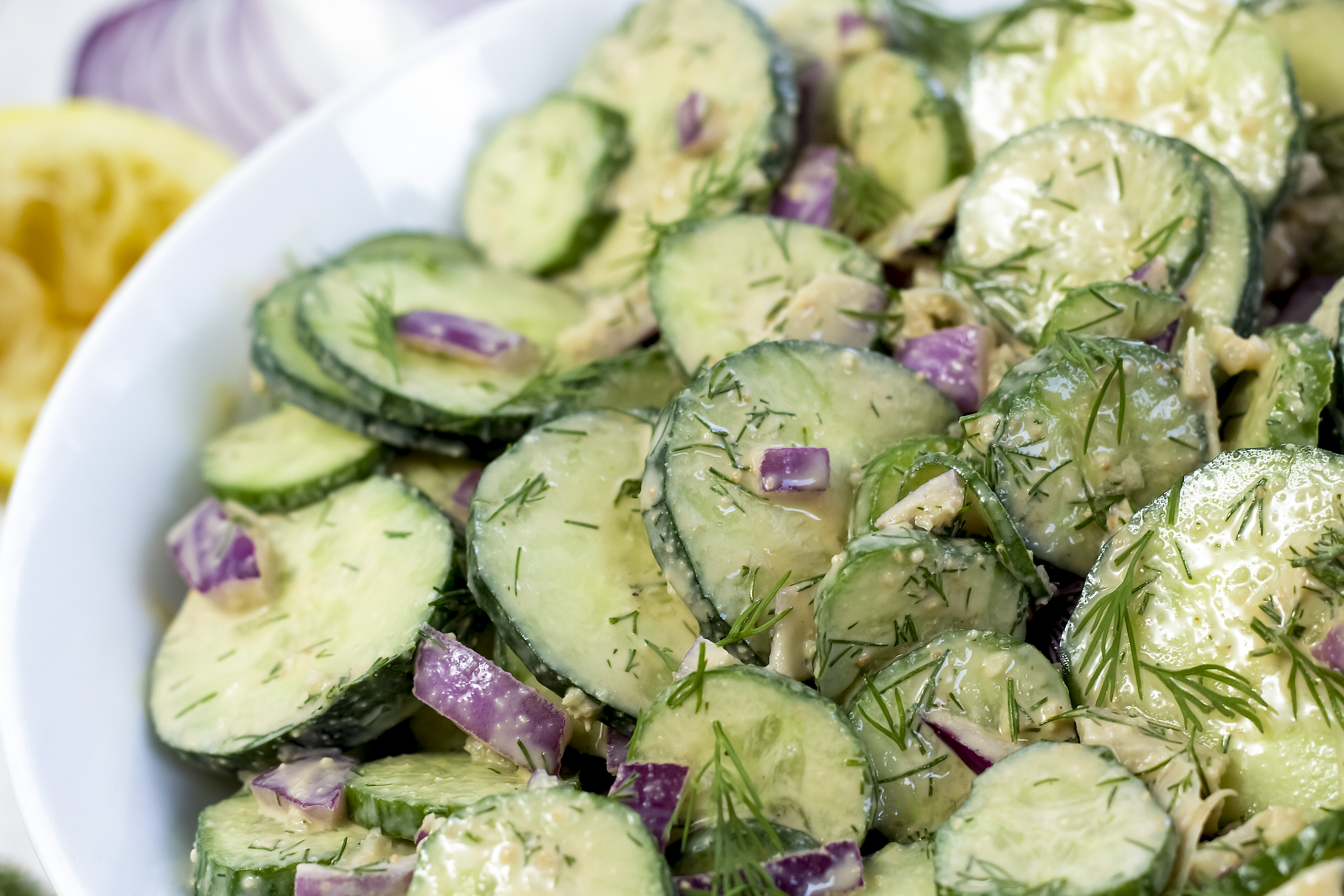 5.0 from 1 reviews
Creamy Vegan Cucumber Salad
Print
Prep time
10 mins
Total time
10 mins
Vegan Creamy Cucumber Salad is made with fresh dill and a homemade Creamy Ranch Dressing. The perfect side for a Summer BBQ or to bring to a cookout.
Author: Ceara
Recipe type: Salad
Serves: 5 servings
Ingredients
Creamy Ranch and Dill Dressing
Directions
Notes
*Use all natural (plain) sunflower seed butter for a nut-free version of this recipe.
3.5.3226

This was awesome!! I changed the recipe a little and added a little tahini to my sauce because it’s a great source of calcium. Everyone raved about how good it was!! Thank you very much!

Thank you SOOOO much for this recipe! New to the WFPB lifestyle in January and this is definitely something we would have missed this summer. Going to get some cashew butter this week and then make these with our CSA cuces!!

Yay!!!! So glad you enjoyed the cucumber salad! Thank you for the lovely feedback. 🙂