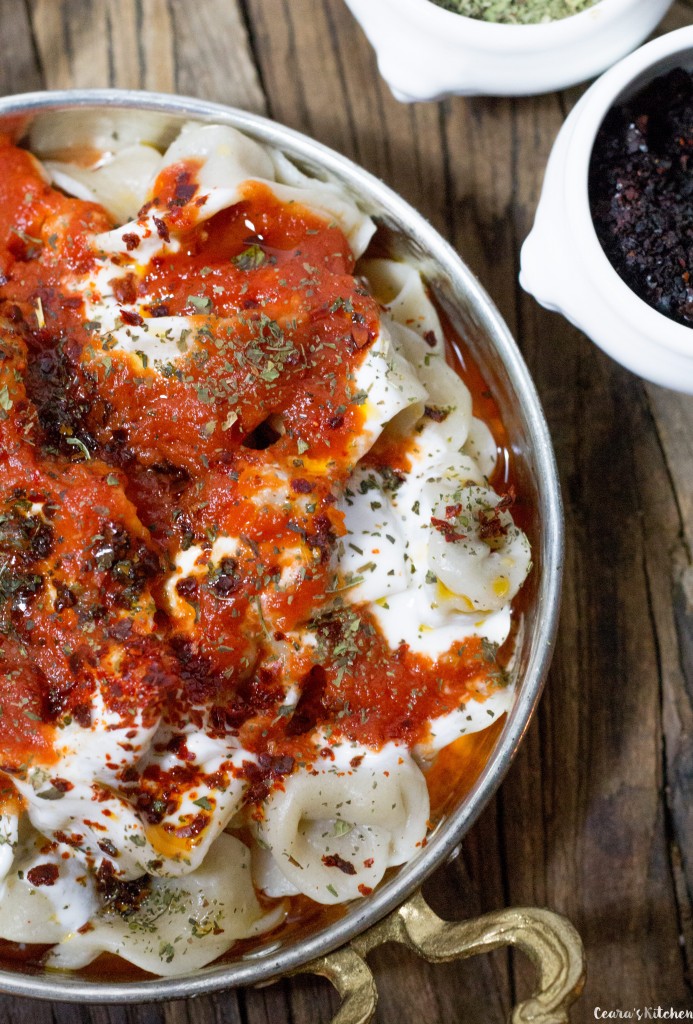 Have you ever had Homemade Manti before? Manti has to be one of my favorite meals ever. My stepmom, Hande, is originally from Istanbul and the entire family LOVES whenever it is Manti night. I remember my first time having Manti in Istanbul several years ago and I was blown away by the simplicity, warmth and flavors of this filling dish. If you are not familiar with Manti, it is similar to a meat-filled tortellini or ravioli. Manti is a traditional dumpling eaten in Turkey as well as other countries in the region served with a garlic-tomato sauce, yogurt sauce, spicy butter sauce and garnished with mint and sumak.

My stepmom and I have been meaning to make Vegan Homemade Manti together ever since I moved back to Toronto in September. We made a mushroom-meat filled vegan version last weekend and everyone was blown away by our Vegan Manti – nobody could tell the difference between our Manti and the typical meat-filled version.

Making Homemade Manti at home involves several steps that are quite labor intensive (in terms of cooking recipes go). My Stepmom says that in Turkey, women has “Manti parties” where they make giant batches of Manti and share the work with one another. There were three of us making this recipe and I would definitively recommend having at least one other person to help you stuff the Mantis. Plus, it makes the whole Manti making experience more fun (and authentic!). Here goes… 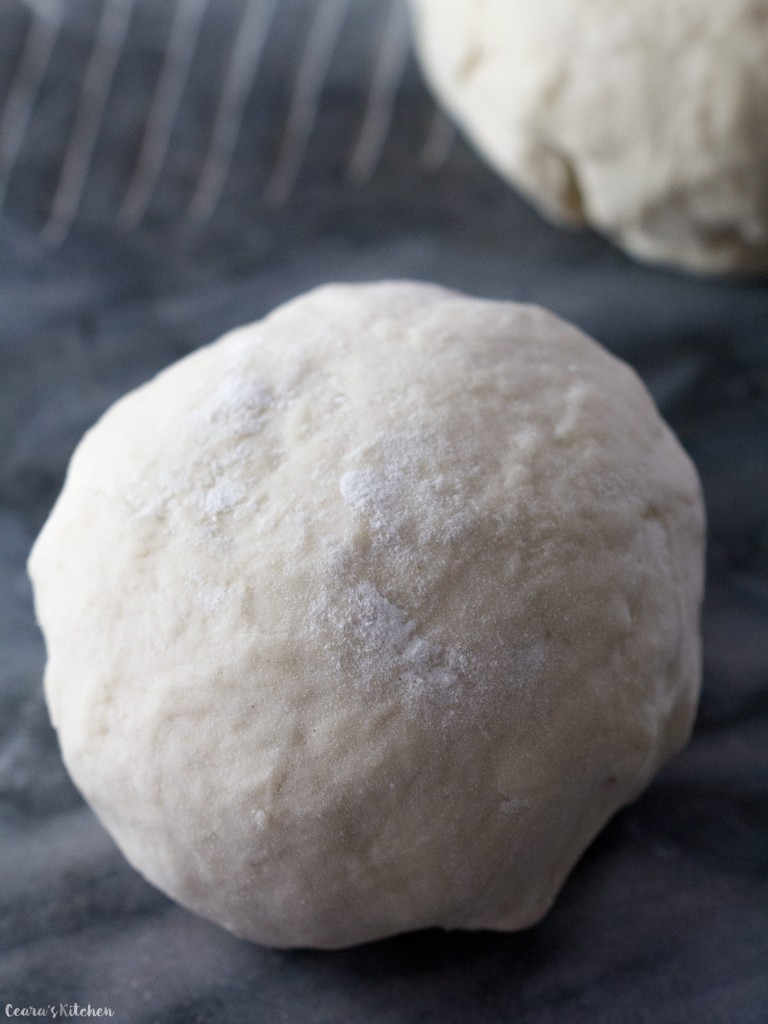 First combine your flour, salt and water. Knead and press the dough for 8 – 10 minutes until you have a firm and soft ball like the one pictured above. If you have ever made pasta, the dough ball should be a similar consistency. If you press the dough in with your finger it should slowly pop back out.

Roll out the dough as thin as you can. My Stepmom says that in Turkey they say, your dough should be a similar consistency to your earlobe. Sounds weird, I know, but if you feel the dough and your earlobe they should kinda feel the same (and if you do, do this “test” you’ll see that they do!).

Cut the dough into rectangles and… 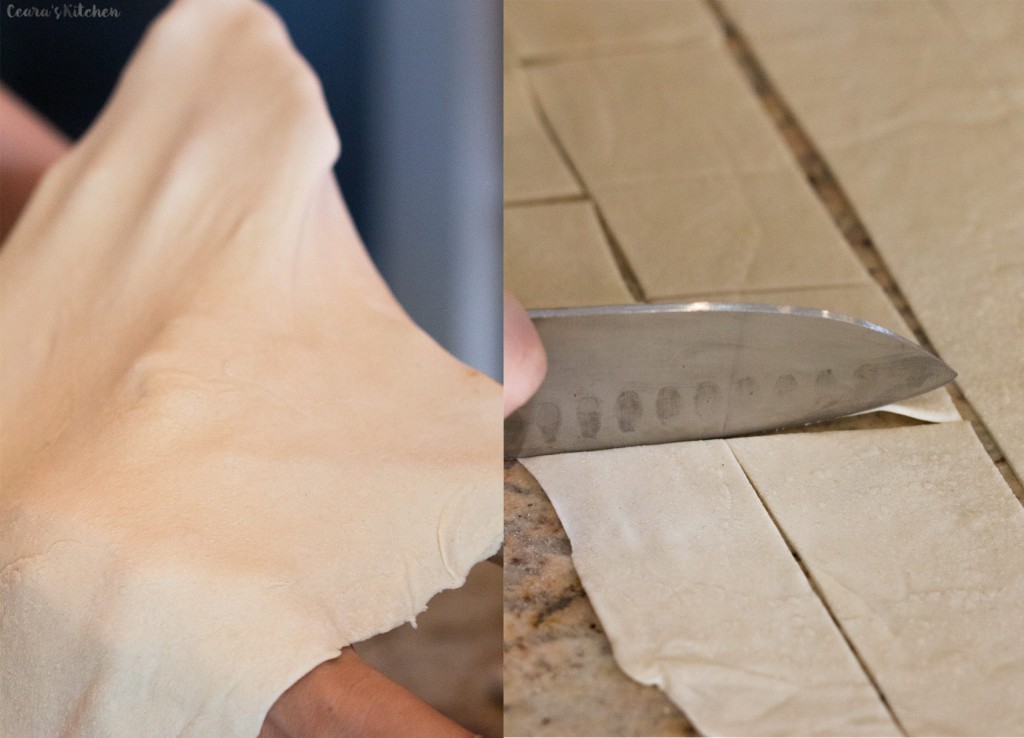 Get ready to stuff! Place a teaspoon of the mushroom-meat into each rectangle. 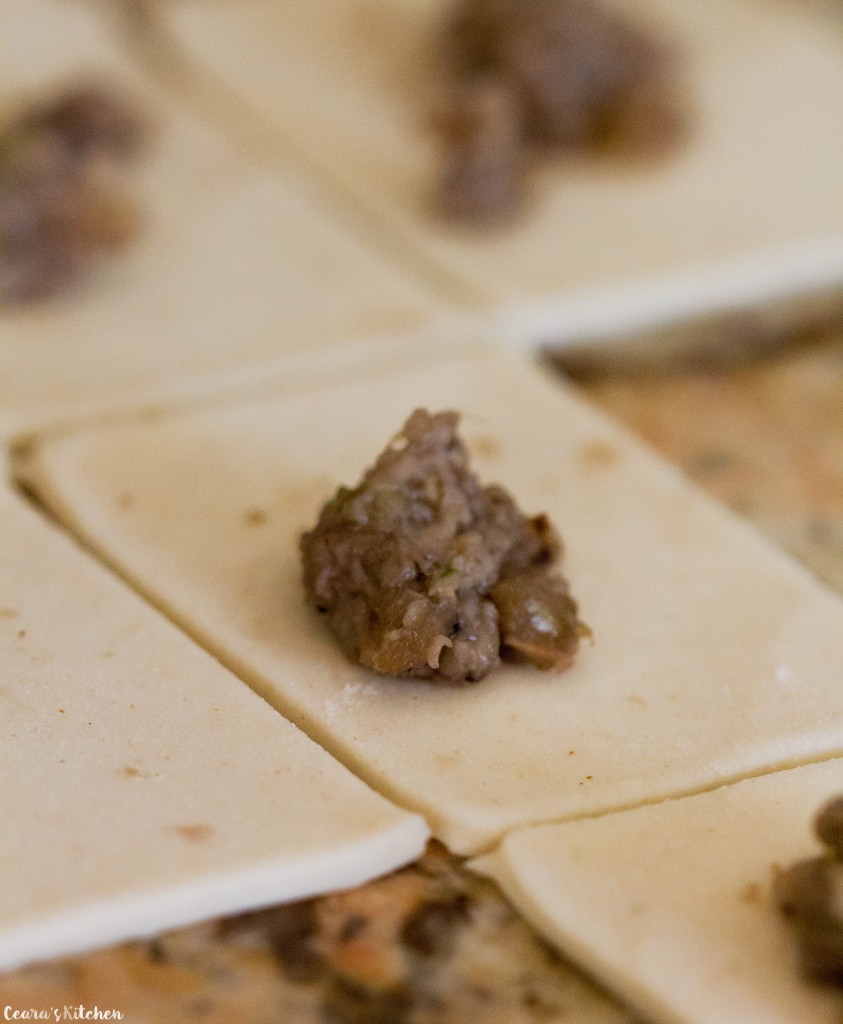 And fold the manti into a triangle, pressing the edges together so none of the filling spills out when you are cooking them! 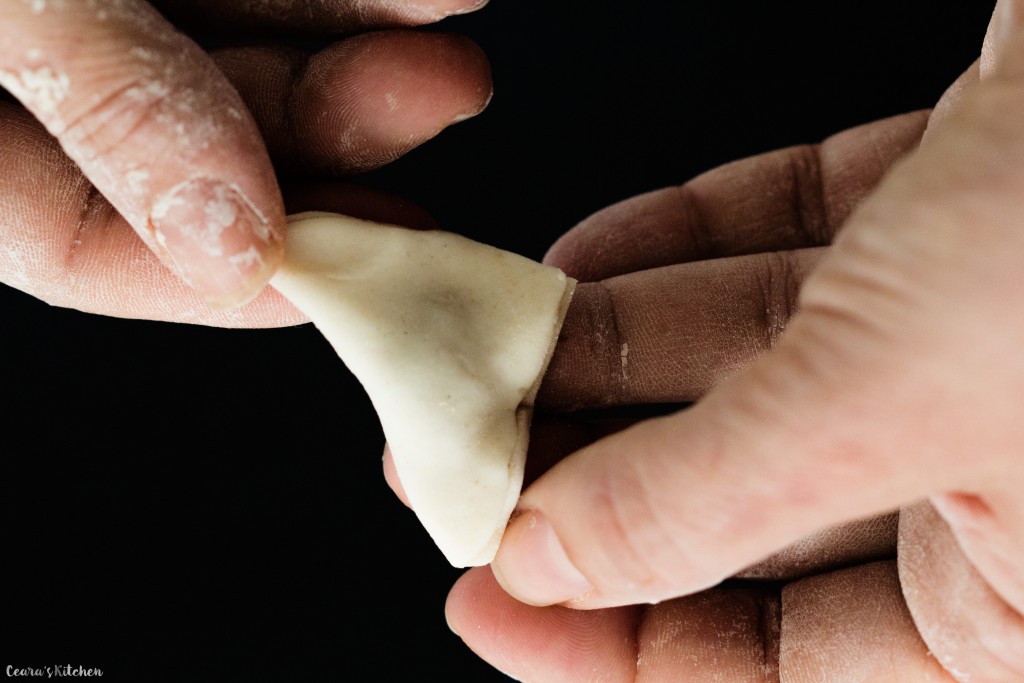 Press the two sides of the Homemade Manti together in the middle and you’ll have a dumpling that looks something similar to this. Repeat until you have used up all of your dough. At the end of this, you’ll be happy you had a second (or third) pair of hands to help you! 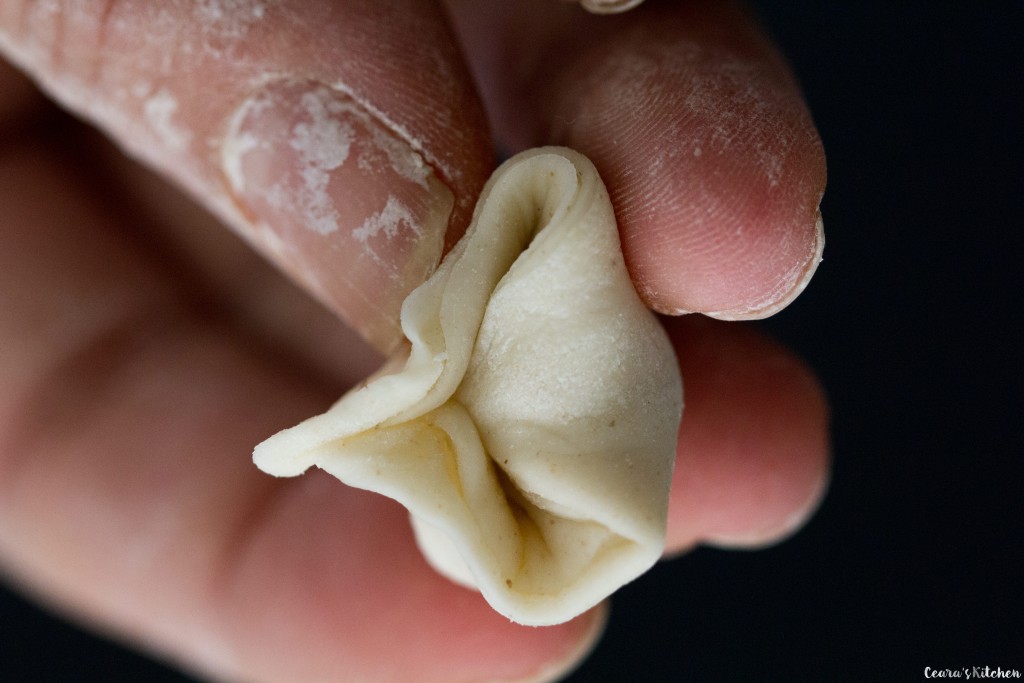 Toss the Homemade Manti in flour. And either proceed to boil the Manti or you can freeze them at this step for later. Each person eats about 2 cups of uncooked manti. If you are serving a smaller crowd, measure out this amount and you can keep the rest of the Manti for later in the freezer. 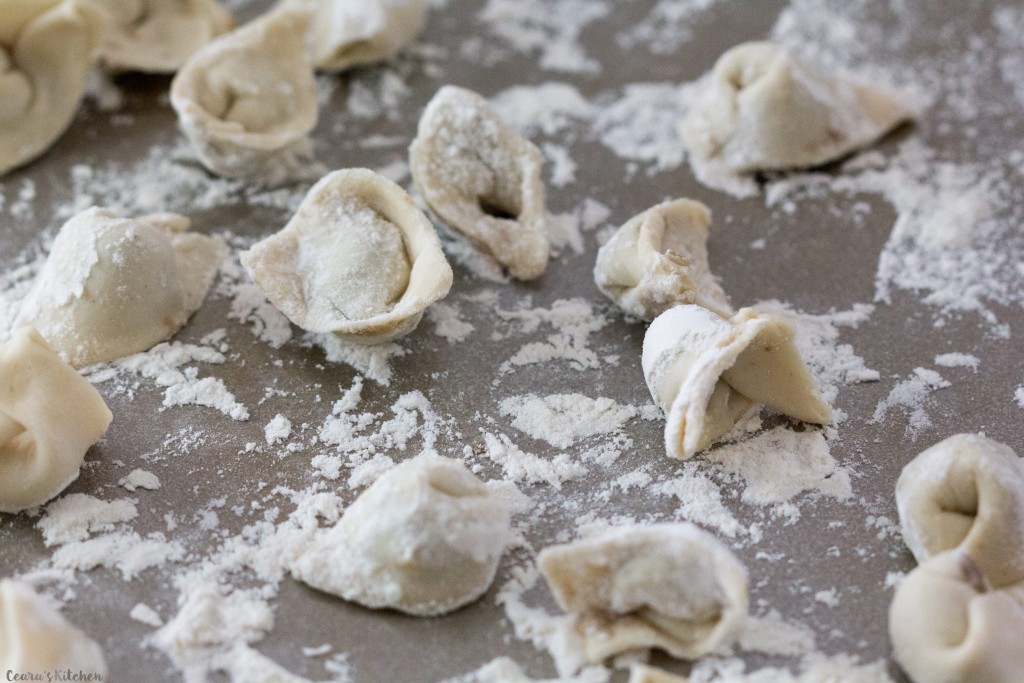 Boil the Manti until cooked and serve with garlic-tomato sauce, yogurt sauce and the spicy “butter” sauce. You can omit the butter sauce if you want this dish to be oil-free. Garnish with mint, hot pepper flakes and sumak. Sumak is a lovely spice used in cuisine from this region. You can find it online here or at Middle Eastern or Turkish grocery stores.

Is Manti traditionally eaten where you are from? I would LOVE to know YOUR “tips and tricks” and any variations you have on this dish in the comments below! Share your feedback below or snap a photo, share it on instagram and tag #CearasKitchen. 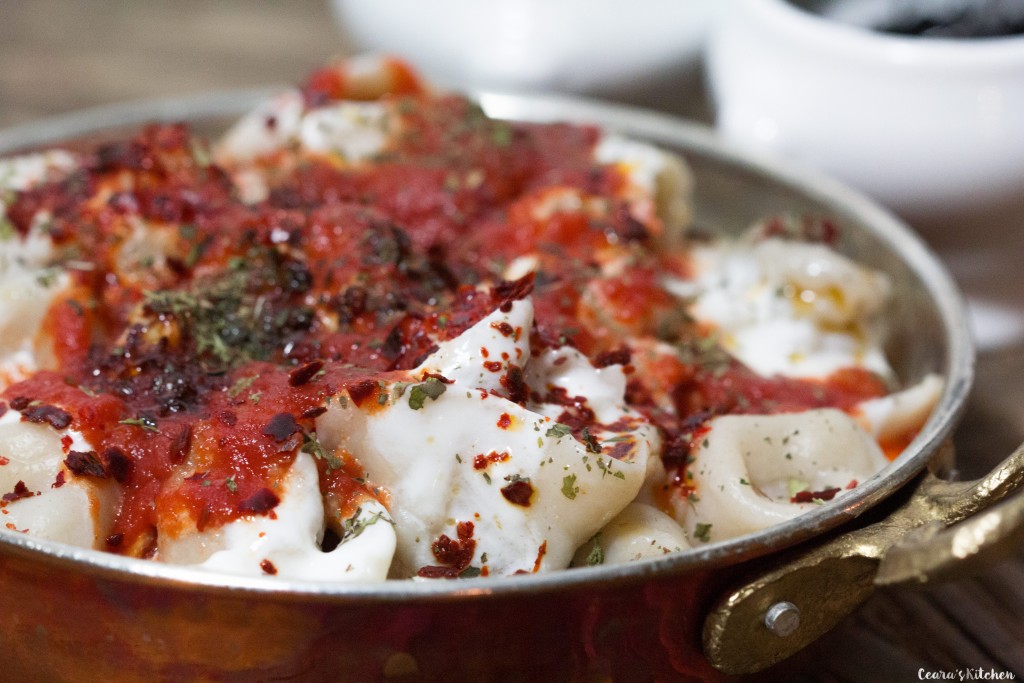 Homemade Manti
Print
Prep time
3 hours
Cook time
30 mins
Total time
3 hours 30 mins
Homemade Manti (Traditional Dumplings) make a delicious, comforting and filling meal. Homemade dough is stuffed with mushroom meat stuffing, cooked and served with a garlic-tomato sauce, yogurt sauce and spicy "butter" sauce. If you are not familiar with Manti, they are similar to a meat ravioli or tortellini.
Author: Ceara
Recipe type: Main
Serves: 6-8 servings
Ingredients
Mushroom Meat Stuffing
Dough
Tomato Sauce
Yogurt sauce
Butter sauce*
To Serve
Directions
Mushroom Meat Stuffing
Dough
Tomato Sauce
Yogurt Sauce
"Butter" Sauce
Cook the Manta
Notes
1) Leave out the butter sauce if you need this recipe to be oil free.
2) To Freeze, you can either freeze the balls of dough in two portions OR the individual mantis in sealed plastic bags if you are going to serve the manti later.
3) The tomato sauce already is quite "garlic-y" so you can choose to leave out the additional garlic in the yogurt sauce to suit your personal tastes
4) Use ONLY unsweetened vegan yogurt in this recipe. Most store bought version have sugar added to them which will not work with this savory dish. My homemade vegan yogurt works perfectly in this recipe!
3.4.3177 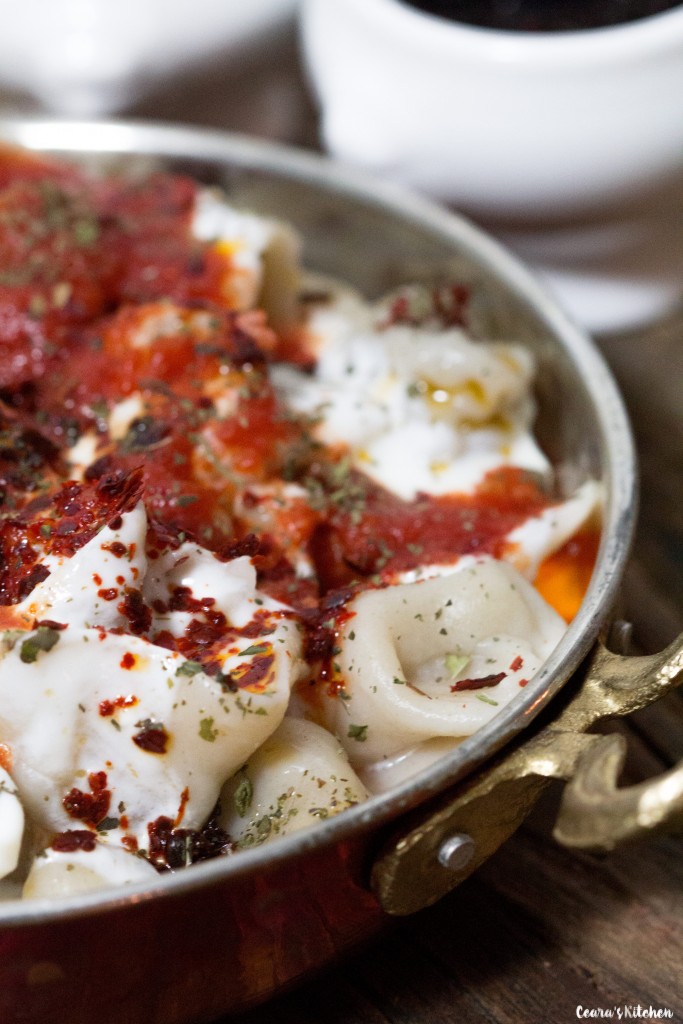 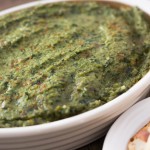 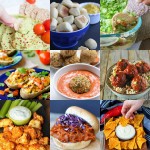 Just wondering if these could be made with whole wheat flour… looks delicious!

Manteh not Manti is Armenian! Not turkish

I’ve never had this before (or even heard of it actually!) but just from the ingredients I know I would love it! Tortellini is exactly what I was thinking of and then you even said it, very reminiscent, and I used to love tortellini. Plus that mushroom filling sounds really, really easy! The three sauces on one dish part is probably the most unusual part to me, but I can see where all the different texture and flavors would be fantastic together. And I lol-ed at the earlobe thing! So weird, but it makes sense hahaha 😀

I have never heard of manti before, but I love tortellini/ravioli and these look delicious! The mushroom filling sounds perfect!! I can see why it would be handy to have a second (or third) pair of hands for this job! I love recipes that pass on traditions like this…so fun!